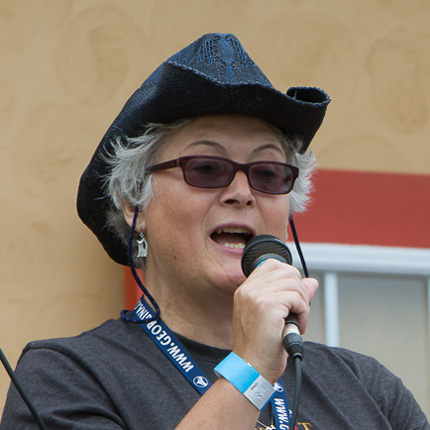 About Jan Hall
After a 25 year veterinary career culminating in a tenured university professorship, Jan has returned to her passion, music and radio. These days, Jan is a very successful radio broadcaster and much sought after stage host/festival emcee. Her flagship show, Folk Roots Radio airs on CFRU 93.3fm (Guelph, Ontario), Erin Radio 88.1fm (Erin, Ontario) and the Blues & Roots Radio internet station.

As the host of Folk Roots Radio, Jan focuses on bringing new folk, roots and blues music and the voices of upcoming and independent artists to the airwaves.

In addition to her radio show, Jan is an accomplished public speaker, stage host and regularly emcees at several folk music festivals. Music may also be sent to Folk Roots Radio electronically as mp3s (320 kbps preferred) to jan[at]folkrootsradio.com*

*To cut down on the inordinate amount of spam I currently receive, I’ve replaced the “@” symbol with “[at]”. To email me, simply replace the “[at]” with “@”. Thanks!